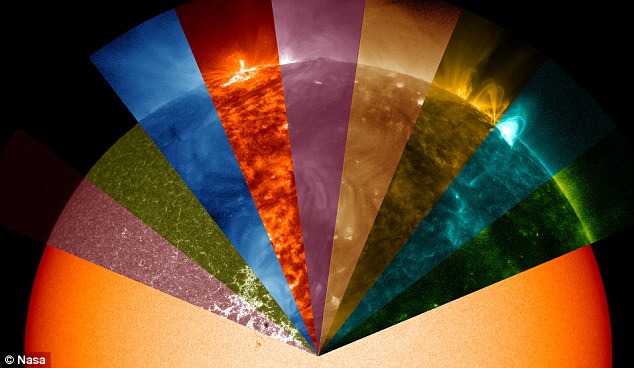 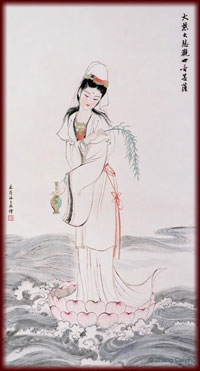 This article covers the relationships between frequencies, elements, astronomy and healing. This integrated system mirrors the heavenly patterns on earth and was rooted in Hermetic knowledge. For more, see the Sound Medicine and Voice Analysis pages on this site.

Quan Yin is the bodhisattva of compassion and healing.
Her longer name is Guanshiyin, which means
“observing the Sounds (or cries) of the world.”

March 14, 2011 ~ I awoke to a brilliant sunrise and began to pray for the people and country of Japan, for the containment of the radioactive materials in the nuclear power plants, for the earth, for our children who will inherit the toxic aftermath, and began to weep. I thought, what can I do to help?

As the information began pouring in, an idea began to formulate: Find the tones that will help neutralize the radioactive elements and offer the recordings to the relief effort in Japan.

The following is an account of the days leading up to one of the earth’s most destructive disasters. The signs were in the heavens and had a powerful reaction on the earth.

Our planet is in a climate crisis. Will we pursue the Holy Grail of Beauty and Sustainability to Heal the Wasteland? 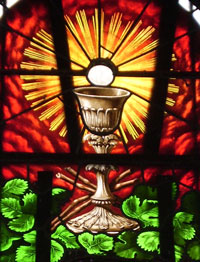 As the grail knight Percival stood at the beginning of his grail quest to bring healing to the kingdom, we stand at a turning point of great choices. Will we choose sustainable green energy for our planet? We are living at a pivotal moment and our choices will determine our future. This is a time calling for radical awakening and cooperation between people of all countries and varied beliefs. Will we do it?

Wednesday, March 9, 2011: Space weather recorded a giant X-class flare eruption on the sun. And in the Mayan calendar we entered the Ninth Wave. According to author Johan Calleman, this was the first day of the Ninth Wave of the Mayan Calendar, the ‘eleventh hour’ period leading up to 2012. This is meant to be heralding a time of Unity Consciousness and the birth of a new era. Certainly we have begun to realize we are all together in this massive series of changes.

Friday, March 11: A 9.0 earthquake struck Japan and an up to 30 foot high tsunami resulted, engulfing all in its path. The tsunami also impacted Hawaii and the West coast of the US. The earthquake moved the country of Japan more than two meters (8 feet), shortened our days and tilted the axis of the earth. Numerous aftershocks were over 7.2 in magnitude.

Two days later, Uranium+ and Possible Meltdown:  Fukushima’s nuclear power plants began to fail and radioactive materials began to leak into the environment. As I write this, at least four of the reactors are facing possible complete core melt down. (Note: the US has recently begun building numerous nuclear power plants along the gulf coast, the site vulnerable to hurricanes ~ is anyone listening?)

I immediately contacted my cousin, who is a nuclear scientist, and asked him for his opinion on potential outcomes. He sent me a comprehensive list of all the toxic elements that could be released in a worst case scenario. Of the 22 toxic elements my cousin listed, I have only listed the ones he indicated to have the most long lasting threats to humans and nature:

In addition to all the information circulating about herbs, seaweed, supplements that are helpful to counteract effects of radiation, an even more important factor is not to succumb to fear and panic. If we maintain our center and equilibrium, we can have compassion for those who are truly suffering and offer more effective helpful action and prayer. So many in Japan are enduring unbelievable loss and bearing it with grace and dignity.

As I was looking at the above list of toxic elements, I suddenly realized that we could use the frequency of these elements to neutralize the effects. In my work with sound frequencies, the same tones associated with trauma or toxic elements are also used to release negative effects and promote healing. Similar to homeopathy, a non-toxic and minute dose of arsenic (arsenicum remedy) is administered for various forms of poisoning.

In the Songaia Sound Medicine system of therapy, we use tones based on the elements in the periodic table, which are each listed with an atomic weight. These are the 108 elements occurring in various combinations on our planet. The frequency assigned to each element is a number based on this atomic weight, i.e. cesium is 132.91, which in Hertz (cycles per second) is a C tone in the octave of a male chanting voice.

I looked up the atomic weight of each of the elements being released from the nuclear reactors, and translated these numbers to Hertz. Here are the musical tones closest to the frequency of each element: 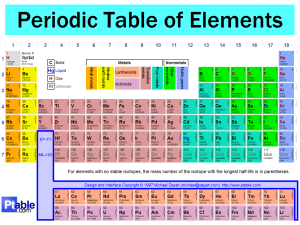 These tones associated with the elements leaking from the nuclear reactors are the very same frequencies relating to a rare planetary alignment at the time of the solar flare and earthquake. This includes the Full Moon and Equinox March 19-20, and continues through the New Moons and Full Moons of April and May 2011. 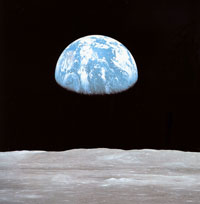 As Above, So Below

In the ancient Hermetic principle of As Above, So Below, there is a mirroring of the celestial movements and frequencies on earth. For decades, astrophysicists have been researching and monitoring the movement of the planets and the activity of the sun to discover how this affects weather and earthquake patterns. A report released in Moscow by the Institute of Physics of the Earth has reported “increasing electromagnetic signals being detected in the Earth’s upper atmosphere over many regions of the world.” The voice of the earth is speaking louder. Will we listen? (See article On Earth As It Is In Heaven) 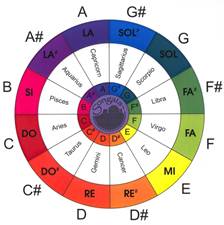 Long-range weather forecaster and mathematician Ken Ring from New Zealand, predicted the deadly Christchurch earthquake and said recently, “The planets very much affect the earth, indirectly, by having an effect on the Sun…At the moment, we have the giants, Jupiter and Saturn, on either side of the Sun and creating a tug of war with Earth in the middle.”” This is creating a state of dynamic tension on the Earth.

One of the basic techniques used in Songaia Sound Medicine, is analyzing the frequency patterns formed by the planets, sun and moon at the moment of a person’s birth. Following this, we analyze the frequencies occurring in the client’s voice. Invariably, the planetary tones mirror the tones in the voice, giving 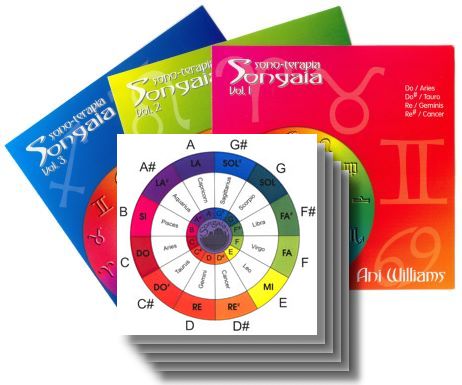 a clear picture of that individual’s ‘Sound Signature’. We then apply these tones for healing and integration, which affect’s one’s physical, emotional and mental well-being.  In this system, each of the 12 signs of the zodiac is assigned a frequency from the 12-tone chromatic musical scale. Each of the 12 tones are recorded on 15-minute sound meditations on Songaia Sound CDs available on this site as downloads.

The principle of As Above, So Below is revealed in both individuals and our Earth. There is an astonishing sound correlation relating to our current heavenly and earthly patterns: The primary frequencies related to both the current planetary alignments and the radioactive materials being released into the world are C, B, B flat and F, F#. 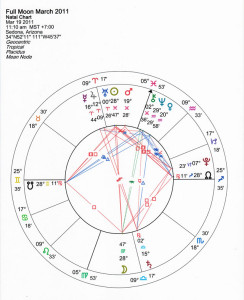 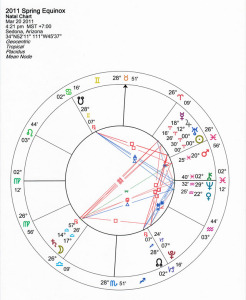 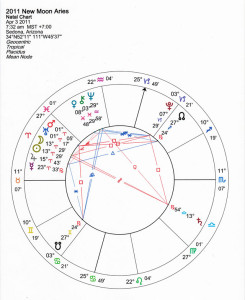 We have six of the planets, including the Sun and Chiron all in the signs of Pisces and Aries. If we look at the corresponding tones, they are B and C. These signs and tones relate to the beginning and the end in several systems:

So one can see that by looking at this time from many angles, it is a time of endings and new beginnings and crucial choices will be made, which will determine how our future will evolve.

Here is a simplified list of the elements and planets that were prominent during the Fukushima disaster. Hopefully this will make it easier to see these correlations:

(Since the moon is in the last degrees of Virgo, it is at the midpoint between F and F#, Virgo and Libra. Saturn in Libra is opposite the Aries planets—creating a very dynamic tension.)

Tones for Humanity and a New Earth

How can we apply this information to be useful at this time? As the indigenous cultures of the planet have done, we can live close to nature’s elements and rhythms. We can become aware and align ourselves to the turning of the seasons and the movements of the heavens. We can use music and sound for healing. Harmonious sound not only benefits ourselves, but radiates into the environment around us. It releases stress, anxiety, alters brain states and creates a coherent field in a time of chaos. This also helps clear the energies within the collective consciousness that are holding fear and survival based emotions. 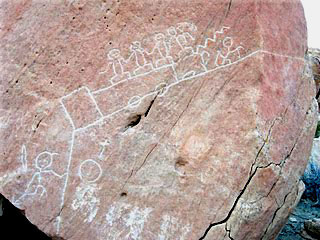 A Hopi Prophecy for Our Time

As I observed the unfolding events in Japan and the nuclear meltdown, I thought of the Hopi Prophecy and the pictograph near Oraibi on the Hopi Mesa in Northern Arizona. It appears to reflect the current time and events. According to the Hopi, the drawing depicts Great Spirit on the left, telling the people to lay down their weapons. To the right a diagram represents the world being divided into two paths: The lower path is followed by the One-Hearted people and leads to Paradise on Earth. The upper path is that of the Two-Hearted people and leads to self-destruction. It is the path of technology without spirituality.

“There is a river flowing now very fast.
It is so great and swift, that there are those who will be afraid.
They will try to hold on to the shore.
They will feel they are being torn apart and will suffer greatly.
Know the river has its destination.
The elders say we must let go of the shore, push off into the middle of the river,
Keep our eyes open and our heads above the water.
And I say, see who is in there with you and celebrate.
The time of the lone wolf is over. Gather yourselves!
Banish the word “struggle” from your attitude and your vocabulary.
All that we do now must be done in a sacred manner and in celebration.”

Let’s work together for a better world, for a possible dream for a Green Earth. 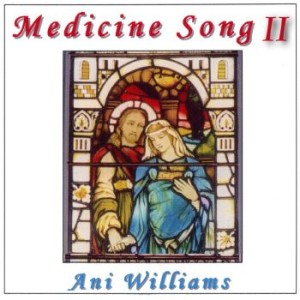