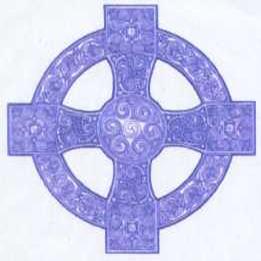 “…an unsung land is a dead land: since if the songs are forgotten, the land itself will die.”
— “The Songlines” by Bruce Chatwin

DRAGON LINES ACROSS THE ENGLISH COUNTRYSIDE

Glastonbury, the mythical Avalon, lies in the gentle green hills of southwest England and has been a place of pilgrimage throughout known history. From the time of the Druids, early Christians, Arthurian Knights, and those in search of the Goddess and the Grail Mysteries, Avalon has drawn seekers. The Tor, an earthen mound, the central outstanding feature of the Glastonbury landscape can be seen for many miles as one approaches, with the St. Michael tower on top.

The Tor has been sculpted with terraces that form a labyrinth, and according to British author and geomancer John Michell, the labyrinth must have been carved about 4000 BC, but accurate date still eludes even the most rigorous of modern dating techniques. The Tor is also significant in the entire sacred landscape of Britain, as it is one of many sanctuaries in the alignment known as the St. Michael ley line, the longest line that can be drawn across southern England, running from southwest to northeast, and one of the longest “dragon lines” in all of Britain.

Along this straight alignment, are many other sanctuaries dedicated to St. Michael, and also including the entire Avebury megalithic complex. To balance the yang straight alignments of Michael, a meandering, curvy Mary line weaves in and out of the Michael line, giving a perfect yin complement. Interestingly where these Mary and Michael lines intersect, there are often springs, holy wells and surges of powerful energy. An excellent reading reference can be found in Hamish Miller and Paul Broadhurst’s book “The Sun and The Serpent” (Pendragon Press, Cornwall, England).

Avalon holds many layers of myth and magic. Numerous Cornish and Somerset legends say that Joseph of Arimathea brought the Holy Grail to Glastonbury, and established the first cross cultural Christian church, called by some the New Jerusalem. With the quality of light present in Avalon, especially on Chalice Hill and within Chalice Well Gardens, it is easy to sense the presence of the Grail Mysteries.

The medievel Abbey ruins, supposedly built on the foundations or the original wattle church of Joseph of Arimathea, rise elegantly in the center of town with a major alignment and ley line running through the abbey’s high alter and on to Stonehenge. We find these lines of energy connecting and intersecting at all the megalithic temples, linking them with the natural flows of the landscape and astronomical cycles, to create an ordered system that maintains terrestrial harmony. The ancient Chinese practice of feng-shui relates these lines of energy to chi, and the dragon lines (lung mei) served to nourish all life forms, revitalizing, sanctifying and promoting prosperity and happiness for the land and the people who live there. 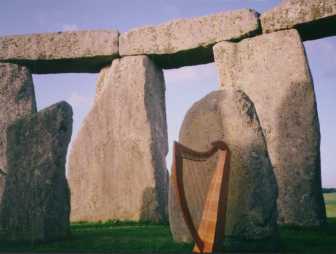 From the time of the Druids, through the early Christian era, a tradition of perpetual chanting was maintained in Glastonbury. According to John Michell, in his book “New Light on the Ancient Mystery of Glastonbury”, these perpetual choirs were active in twelve different sanctuaries across the Celtic land, and the chanting helped maintain the Grail secrets and the life energy of Britain.

“…it was largely by chanting that the Druids kept up the spell of enchantment across the Celtic Kingdoms. It can be assumed, from traditions passed down through the Celtic Church, that a perpetual chant…was related astrologically to its time and place and progressed through the seasons of the year. It was a twelve-part chant, based on the twelve notes of the chromatic scale, one for each hour of the day and of the night. Each note corresponded to one of the signs of the zodiac and thus to one of the twelve tribes in a Celtic Kingdom.”
(For further reading on the astrological-sacred site connections refer to Graham Hancock’s books “Fingerprints of the Gods” and “Heaven’s Mirror” which compare ancient temple complex designs with celestial alignments.)

In Glastonbury lore we find a recurring theme of a council of twelve, with the twelve Arthurian Knights of the Roundtable, twelve monks maintaining the harmony at the abbey and a phenomenon known as the Glastonbury Zodiac, with representations of the twelve signs to be discerned in the landscape features surrounding and within the town city limits, as viewed from above.

In recent years, there is a movement afoot with friends in Glastonbury and Stonehenge to reinstate the practice of perpetual choirs. The Tibetans remain as one of the last cultures to maintain this tradition. We know from many ancient cultures that sacred sound not only nourishes all living beings, but serves to keep harmony and balance on the earth. According to the Australian Aboriginals, the very life of the earth is held together with a song!

“…an unsung land is a dead land: since if the songs are forgotten, the land itself will die.”
— “The Songlines” by Bruce Chatwin

This past July we found ourselves once again in England for the grand cross planetary alignment and full moon eclipse (not visible in UK) As readers may recall from Chet Snow’s recent Four Corners article on the 1999 crop circles, it was a prolific year for them. As one drove over the narrow, winding roads (some only as wide as a footpath!), the crop formations could be seen on most hills in fields of grain, and on both sides of the road, especially in the region of Wiltshire, near Avebury. The formations were extremely detailed and complex, many giving new 3-D multiple patternings. The forms ranged from swirling nine-pointed star patterns, to Egyptian wings, a Hebrew menorah and one even appeared similar to a computer chip. 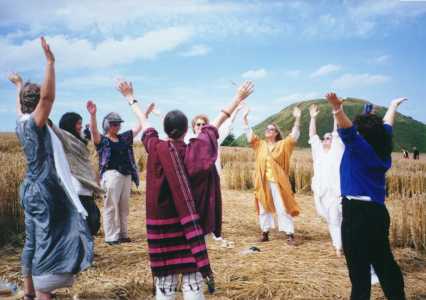 Two days before the July 28th full moon and alignment of planets (in all four of the fixed zodiac signs of tropical, western astrology), our group was meditating inside the nine pointed star crop formation. We asked for an appropriate tone, and the group sounded together for several minutes, and then sat in silence, most experiencing a profound altered state of consciousness, and luminosity. As we fairly floated out of the circle, we serendipitously ran into Chet and Kalista Snow, who invited us to join their full moon prayer in two days, in nearby Avebury’s stone circle.

On the morning of the planetary alignment we arrived at Stonehenge for sunrise. It was a perfectly clear and mild morning. Our group filed into the inner circle, after receiving the purification of holy-well waters that had been carried to each stone circle and sanctuary during our journey, and imbued with many songs and prayers. With a clear heart-centered intention and honoring the six directions, we began our ceremony. Time seemed to stand still during the two hours of chanting, prayer, and a powerful return to the center, honoring the sacred in the earth and all of humanity. This felt to me like a fountain of fortunate blessings pouring over the earth. (During a recent teaching with Bardor Rinpoche of the Kharma Kagyu lineage, he told us that when chanting a mantra in a sacred site, the benefits are a thousand times more powerful) Using the power of place combined with sacred sound and the potent planetary configuration, a greater harmony and increase of life energy was felt by all.

We drove on from Stonehenge to Avebury to meet up with Chet’s group for the exact moment of the full moon, and continued our circle of silent and guided prayer, songs, and chants. The wind picked up right at the moment of the alignment, and the harp began to sing, being played by the varying gusts of wind, creating multiple cascades of harmonic sound. Most of the group had never heard anything like it and it added a definite mystical ingredient to an already ecstatic day. That very night a crop circle formed within view of our circle of friends, as a possible response to the prayers and harmonic sounds that blessed the land. 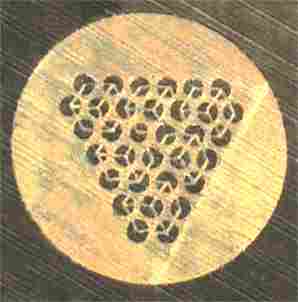