Enchanting music to remember Pyrenean myths of creation, places of power, and fire rituals of renewal.

Passionate and soaring melodies sung in Spanish, French, Latin, Hebrew, Arabic, English and Catalan — Inspired by a land of Black Madonnas, medieval Maries bearing Grail Cups of Fire, and pathways of the Camino de Compostela. For many years Ani has been exploring the region of the Pyrenees, discovering ancient mysteries and deeply mystical sites: Greek Asklepian healing temples, Roman sites of the Egyptian Great Mother Isis, and early Christian and Visigothic Grail Chapels dedicated to the Sacred Feminine.

A great network of megalithic dolmens and menhirs (standing stones) reaches from the Mediterranean to the peaks of the Pyrenees and beyond. Standing for more than 5000 years, these stone monuments mirror the stars and earth’s elements across this powerful landscape—If we listen, the songs of these ancient ones can still be heard.

Ani Williams is accompanied by stellar musicians who bring to life the traditions of these sacred places:

“I love your new CD Calling Pyrene!  It is filled with fiery feminine gypsy magic and medicine!” Seren Bertrand, author and recording artist

“I love it. The music reminds me of my favorite albums from the French Café series. I’m transported to Europe as I listen to you.” J.S.

The mythic roots that inspired this music of the Pyrenees:

Pyrene is the breath of fire—mother of serpent wisdom and Celtic princess of the Pyrenees. In Greek mythology, Pyrene was the beloved of Hercules. It is said his voice can still be heard calling her name, echoing through the mountain valleys.

Pyrene’s predecessor Pyrrha was a Greek queen, the ‘Red One’ Goddess of Fire. Her husband, King Decalion, was warned by his father, Prometheus, of a deluge soon to sweep across the Mediterranean. When the great floods came, Pyrrha and Decalion boarded an ark—they sailed for nine days and in mountains to the west they re-established a new civilization on earth.

The ancient tradition of lighting sacred fire on Pyrenees mountain peaks continues … On St. John’s Eve, Summer Solstice, villagers with lighted torches process down the mountain—they honor the fullness of life brought with summer’s sun in this annual Ritual of Fire. 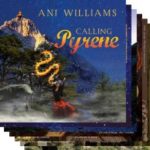